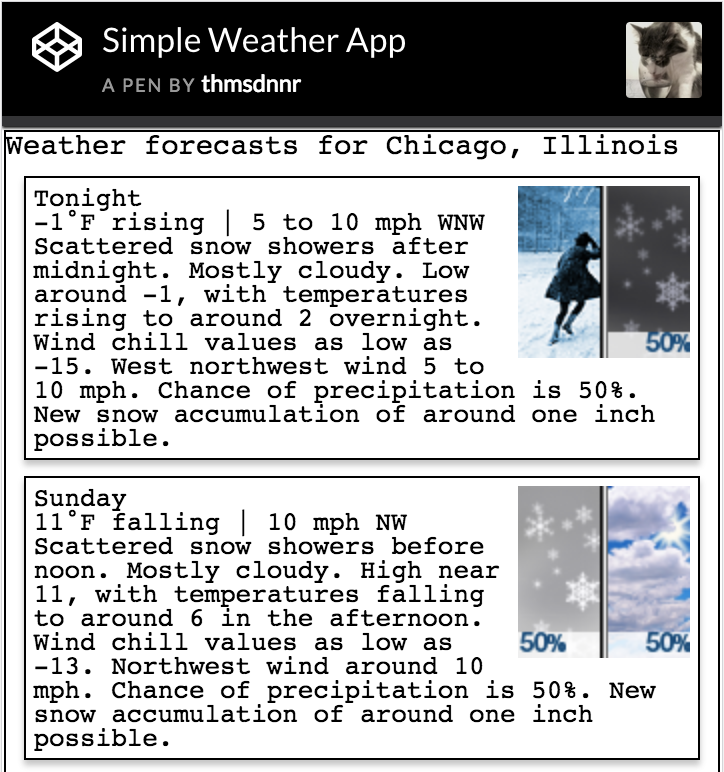 First, we need to understand a few concepts: asynchronous JavaScript, and fetching data from an API.

We often want to create applications that interact with external resources. We’re Imgur, and we have images hosted on a file system somewhere in the cloud. Or we’re Reddit, and we have a database of posts to request from when a user visits a page.

A simpler example: a weather app that gets the user’s current location and displays a forecast.

We want to get weather information, but we do not want (and cannot afford!) to buy and maintain weather stations, network them wirelessly, power them, code them, and then call to them individually to display updates.

An Application Programming Interface (API) allows us to interact with other programs through the Internet. The National Weather Service has plenty of weather stations, and it’s set up a server from which we can request data. Now we don’t have to buy the weather stations: we just have to tell the server the data we’re interested in, wait for it to arrive, and then display it in the app how we’d like.

To be specific, this sort of API is called RESTful. That’s an acronym for Representational State Transfer, which is really just a fancy term for a contract that a server establishes for client requests.

Check out the “API Reference” tab here for the National Weather Service.

You’ll find a table with an Endpoint column, Formats, and Details. The endpoint is the URL where you request the resource from. In this case, the base URL is https://api.weather.gov. You append the endpoint you are interested in to the base URL.

Let’s use the metaphor of a phone call to your health insurance company. You dial the number. This is the “base URL”. You hear a menu “press 1 for… press 2 for…”.

You choose an option, and then tell the person what information you’re interested in getting. Hey, I pressed 3 for weather info about a point. The latitude is X and the longitude is Y. In a moment, the person responds. “Here’s the forecast!” Or, “Hey, we don’t have any data for that request.”

The server responds with json (JavaScript Object Notation), a common format for exchanging data on the web. It can be used with any language, not just JavaScript. It’s Json because it’s based on a subset of the JavaScript language.

There are two methods in JavaScript that we can use to deal with this format:

JSON.stringify() does just what it sounds like: it turns an object into a string that we can send across a network. JSON.parse() turns that string back into an object when it arrives at its destination. If you remember high-school math, these functions are inverses of one another. That means that:

Note the quote marks around the brackets there.

Think of the object as a letter. You can put it in an envelope with an address, sealing it up with JSON.stringify(). When the sender receives it, they use JSON.parse() like a letter opener to retrieve the contents.

You’ll use JSON.parse() whenever you are dealing with data you’ve fetched from a web service. In fact, as we’ll discuss later in this tutorial, fetch has this functionality built-in.

This usually means that you’ve done something like JSON.parse('asbsdab'): trying to parse a string that has not been JSON.stringify()-d and is not in the proper format.

what happens with your app while you’re on hold?

Networks respond way faster than a customer service line for your health insurance, but there is still a delay between the request and response.

Imagine what would happen if in our app we said, “Okay, request this” and then waited for the request to come back before the app was responsive again?

All the other lines of your code in the application would have to wait. We can’t even play bad call holding music. The user gets frustrated and hangs up. Your app fails.

We want to be able to put something in our code that says, “We’re going to request this data. It’ll take a little bit for it to get back, but when it arrives, perform these actions”. Meanwhile, we’re moving on.

Here’s (one example of) what a promise looks like:

A Promise is an object that takes a callback function. The callback is an interface for code that invokes the promise. We perform our asynchronous request within the body of the Promise, and then we define how to invoke the callback function, depending on the results returned by our request.

Here is how we would call this code above:

Now we cannot just console.log(data) and access our data. If you do, you’ll get this:

Remember, the function is going to take some unknown amount of time to respond. Instead, we say “when the promise has been resolved (with our data) or rejected (with an error), do these things”.

There are three possible states for a promise:

We can chain promises together, or have the resolve() of one promise await the resolution of earlier promises. In fact, this is exactly how our wrapper function fetchWeatherData() will work when we fill in the missing //fetch the data piece.

Fetch is a Javascript interface for requesting data across a network. Hopefully you’re thinking “Wait though, that’s asynchronous”. You’re correct. Can you guess what fetch returns? A promise. Bingo!

This might look confusing. Let’s walk through piece by piece.

fetchWeatherData is a wrapper that takes the latitude, longitude point we are interested in. It returns a Promise saying “Hey, I’ll get you the data as soon as I can.”

Your program says, “Okay, I’ll do other stuff, but when you do pass me back the data, here’s what I’m going to do with it.” The program goes merrily along.

Within fetchWeatherData, we call fetch. Fetch does the same thing as the wrapper.

fetch: “Hey fetchWeatherData, I’m going to request data from the server. It might take a while”. fetchWeatherData: “No problem fetch. When you get the response, here’s what I’ll do.”

when fetch calls us back

When we get the response back, it will be in the JSON format. We check the status of the response. This is the HTTP status code of the request. You’re probably familiar with the good ol’ 404. 200 means “we’re good everybody!”. If the status is anything but this, we’ll reject the promise with the status code.

If the status is 200, then we’ll return response.json(), which parses the JSON and returns it in the object form we desire.

Okay, in reality .json() does more than just parsing. The response body that fetch returns is actually a Stream. Using the .json() method on the response object reads the stream so that we don’t have to. More to come on Streams: they deserve their own series.

If you’d like to visualize what’s happening, paste this into the JavaScript console on your browser: 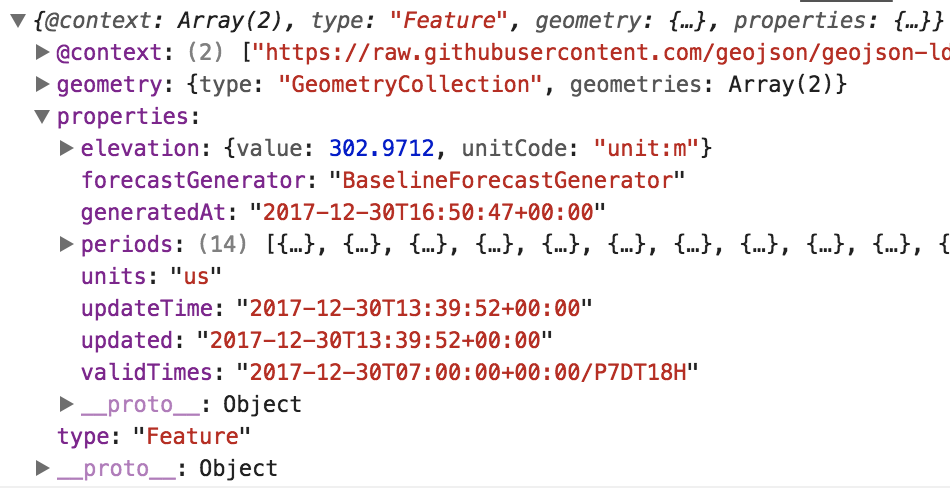 See the periods array (parsed.properties.periods)? That contains 14 forecasts that we can display in our app for the requested latitude and longitude. Sweet!

Here’s what it looks like when we don’t parse the JSON. Note the body property of the response of type ReadableStream: 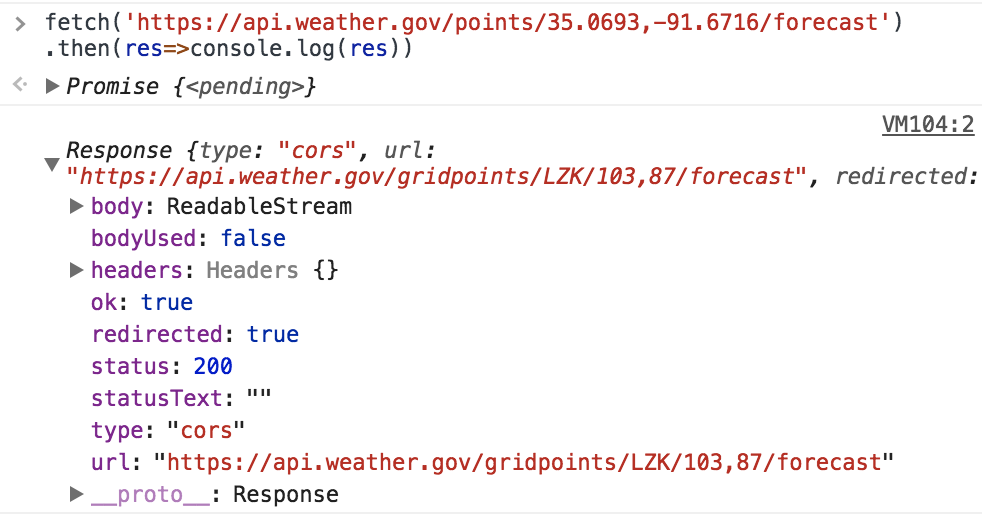 See how initially it is a Pending Promise that then turns into the response? Cool, huh?

To fetch weather forecasts for a user, we have to get their location. We can actually use something built in called the Geolocation API to grab the user’s current position.

We call navigator.geolocation.getCurrentPosition and give it callback of success and error (another example of an asynchronous function!). On success, we receive an object that contains pos.coords.latitude and pos.coords.longitude which we can pass to the weather service API. We’ll use the fetchWeatherData function we’ve already written (not listed below):

The Weather API’s properties.periods is an array of objects like this:

We can choose which items we’d like to display. Then we just iterate through, format them, and output them to an HTML div.

This is all it takes:

Note that we could extend this app to allow the user to input a zip code. You could use Geocoding with Google Geocoder, or a simple dictionary mapping zip codes to a latitude and longitude, extracted from US Census Data like this github Gist by erichurst. This would be another example of chaining promises. User enters City. Pass to Google Geocoder (or grab the lat/lon list), then await response. Then when you have the latitude and longitude, pass it to the Weather API. Await the response from that. Then pass the weather result to your user through the UI.

ReverseGeocode looks just like fetchWeatherData. It returns a promise, we await the response, and if the data is there, we parse and display it. Easy.

Finally, we show and hide a CSS loader by toggling the display style of the loader. We could just as easily create a CSS class .hidden with display:none, and toggle the class on the div with classList.toggle('hidden').

We add some CSS styling to make things pretty. Mobile-first means that we design things to look nice on mobile and then define how they will grow when viewed on larger devices. If you’re on Google Chrome, you can access the mobile simulation in Developer Tools by clicking the cell phone icon near the top. It gives you a dropdown where you can select a device (or choose a screen size) and then select a screen orientation: landscape or horizontal.

The principle of mobile-first CSS is: design things to look good on a small screen first. Then define how elements will change when viewed on a larger screen.

We can define how things will look on larger screens with a media query.

In this case, I’ve chosen to make my forecastPeriod container change to two columns when there is enough space to display it cleanly, by changing its width to 45%. Since it’s inside of a flexbox container with width > 90%, this makes two forecasts display per row.

If you peek at my code for the reverse geocoder, you’ll notice something strange:

CORS is Cross-Origin Resource Sharing. Browsers define guardrails when accessing resources at a different origin other than the server that a site is being served from. In this case, we’re requesting resources from the National Weather Service and gisgraphy.com. Neither of these resources are hosted at https://codepen.com, so CORS headers must be present on the response for browsers to allow access to these resources.

CORS Anywhere proxies the request and adds CORS headers. It’s hosted on Heroku, and it’s https://. This allows us to proxy the response from services.gisgraphy.com through the server and receive a response over https:// that has the necessary headers.

The National Weather Service sets CORS headers, so we’re good there. But you’ll get an error if you try to fetch from http://services.gisgraphy.com, because Codepen is https:// and gisgraphy is http://. You get this:

“Mixed Content: The page at ‘https://codepen.io/thmsdnnr/pen/zpwpRQ’ was loaded over HTTPS, but requested an insecure resource. This request has been blocked; the content must be served over HTTPS.

You can send a fetch reuest to the endpoint iscorsneeded on the CORS-anywhere app. This will return a response without CORS headers set. If you try to fetch this endpoint via CodePen, you get this:

Failed to load https://cors-anywhere.herokuapp.com/iscorsneeded: No ‘Access-Control-Allow-Origin’ header is present on the requested resource. Origin ‘https://s.codepen.io’ is therefore not allowed access. If an opaque response serves your needs, set the request’s mode to ‘no-cors’ to fetch the resource with CORS disabled.`

There are an incredible number of APIs on the web. Using what you’ve just learned , you can now interact with any of them. Some require an API key or special headers, but these are just small tweaks to your fetch request. Try building an app that integrates data sources together in a new and exciting way. Once you learn how to interact with other services, you acquire a huge mechanical advantage when it comes to leveraging small bits of code to do great things. Code on!